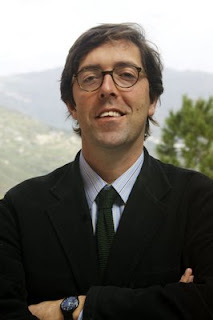 At a recent visit to the Planeta winery near Noto in far southeastern Sicily, I joined a small group of journalists who were treated to a vertical tasting of the winery’s famed Santa Cecilia, a 100% Nero d’Avola. Along with this rare opportunity to try this many examples at one sitting, it was fascinating to learn about the changes in this wine in its brief history.

Winemaker Alessio Planeta (Photo ©Tom Hyland) led the tasting of six wines which included the 2008, 2007 (not yet released) as well as the 2006, 2005, 2001 and 1997, the initial release of this wine. The Planeta estate was set up in Sambuca di Sicilia near Menfi on the west coast back in the mid 1980s and by the middle 1990s, the family had decided to produce a signature Nero d’Avola. The plans were to release this wine from 1995 and 1996, but Planeta decided that the quality was not what he wanted, so 1997 became the initial offering. Incidentally, this was the only wine that was not 100% Nero d’Avola, as this contains 15% Syrah.

Soon after, Planeta decided to focus on a Nero d’Avola in purezza, crafting a wine that would be suitable for long-term aging. Research showed that the best area in Sicily for the variety would be in the southeastern reaches. Planeta along with his agronomists discovered a piece of land near Noto in 1998 that they believed would be ideal for this wine and have been using fruit from this site ever since; the bottlings starting with the 2003 have been produced excusively from the Noto vineyards. An underground winery was built at this property and the wine is fermented and aged in this facility.

As for the tasting, it was interesting to note the more rustic qualities of fruit from western Sicily as compared to the wines made exclusively from Noto fruit. Now that these vineyards are older (some planted in 1974 and 1975 with the newer blocks being planted in 1998), the wine has become more deeply concentrated with more elegant tannins and the dream of a Nero d’Avola meant for long-term aging is starting to become a reality. 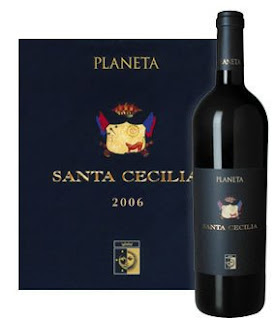 2008 (barrel sample)
Bright purple with a slightly closed nose of plum and marascino cherry; medium-full with soft, young tannins, very good acidity and excellent fruit persistence. 2008 was less rainy than several previous years in Sicily, which is important for Nero d’Avola as the variety suffers from rain and excessive humidity. I love the structure of this wine; combined with the rich aromatics and depth of fruit, this has the potential to be an outstanding wine. (Note: The 2008 will be the first Santa Cecilia labeled as Noto DOC.)

2007
Bright purple with aromas of black plum and black licorice- deep fruit. Medium-full with excellent concentration. Big extract and still a bit tannic with very good balance and acidity. Notes of menthol in the finish. Give this time to round out; should be at its best in 10-12 years. Excellent

2006
Light purple with gorgeous aromas of blackberry, marmalade and black cherry. Medium-full with excellent concentration. Lovely balance with pinpoint acidity, subtle tannins and subdued oak. Excellent fruit persistence- this should hold for 12-15 years. My favorite wine of the tasting – outstanding!

2005
Deep ruby red-light purple with aromas of blackberry, mint, dried red flowers and a hint of nutmeg. Very good length in the finish with round tannins and very good acidity. Light herbal notes in the finish. Enjoy over the next 7-10 years. Excellent.

2001
This is Nero d’Avola from both Noto and Menfi. Deep ruby red with aromas of dried brown herbs, dried strawberry and a hint of tobacco. Medium-full with very good concentration. Good acidity, subtle oak and still firm tannins. This has a definite rustic quality and it quite different from the younger wines. Enjoy over the next 3-5 years. Very Good.

1997
This is the first bottling of Santa Cecilia and contains 15% Syrah. Light ruby red with aromas of dried cherry and cigar. Medium-full with very good concentration. Big fruit persistence, good acidity and restrained oak with rich tannins. This wine tastes much fresher than the 2001 (this could be due to bottle variation). Excellent complexity- enjoy over the next 5-7 years. Excellent.