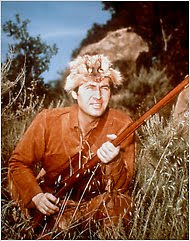 Fess Parker passed away last week at the age of 85; here was a man who truly lived a wonderful life. I remember watching him on television in the 1960s as I was growing up; Parker was famous for wearing his trademark coonskin cap portraying Davy Crockett (“Davy, Davy Crockett, King of the Wild Frontier”) as well as Daniel Boone.

Parker later went on to establish his own winery in Los Olivos, California in the heart of the Santa Barbara wine country. What I loved about Parker was that this was not a publicity scam; he adored this area and liked making wines from this land. He was not a celebrity who was cashing in on his fame, as others have done. Rather, this was something he did because he loved doing it.

His early specialties were a beautiful off-dry Riesling and a wonderfully complex, layered Syrah. Over a decade ago, I did get the opportunity to meet Fess at the winery and he was kind enough to say hello, even though I didn’t have an appointment; he also signed a bottle of Syrah for me – a wonderful gesture. I remember how big he was in person; I recalled his television roles, but had no idea how truly larger than life he really was.

His son Eli is the current winemaker and has turned his attention to Viognier – one of the best I’ve had from California – as well as several small lot Pinot Noirs from Santa Barbara County. These are lovely Pinot Noirs, especially the Pommard Clone bottling and the one from Ashley’s Vineyard. Both are quite rich and complex and Eli has been intelligent enough not to load up on the oak in either wine.

Many people will miss Fess Parker – I’m glad I had the chance to meet him that one day. By the way, I still have that bottle of Syrah he autographed for me. I think I’ll keep it just a little longer.
Posted by tom hyland at 2:38 PM