Champagne Campus - A Great Way to Learn about Champagne Online 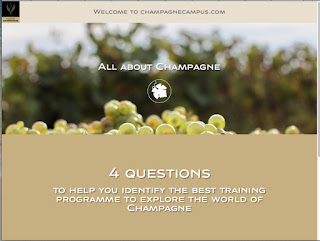 When I think about education and Champagne, I'm reminded of the famous line about the weather - "Everybody complains about it, but nobody does anything about it." Regarding Champagne education, change that saying to "Everybody knows what Champagne is, but almost no one knows much about it."

It's true, to a large degree. Champagne has become a generic word for sparkling wine. With all due respect to Franciacorta, Prosecco, Cava and other classic method sparkling wines, they're not Champagne. Champagne is a specific product from the Champagne region in France and to put it simply, you cannot replicate that anywhere else in the world.

So Champagne is unique, but there is a lot more to Champagne than just a sparkling wine from France. It's about a specific process with specific varieties from vineyards spread out over several districts. It's about a wide array of styles, from non-vintage Brut, the most widely available Champagne to particular cuvées, such as Blanc de Blancs to Rosé to Blanc de Noirs and several others.

In my opinion, few people in America - and many other countries - have a good grasp on the complexities of the subject of Champagne. Ironically, some of these same individuals know a great deal about the various differences in classified Bordeaux and why the wines of Pomerol taste different than those from Pauillac or why a Burgundy from the Cote de Beaune varies so greatly in style than that of a wine from the Cote de Nuits. There are countless other stylistic differences from great wines around the world, but for too many consumers, Champagne is Champagne.

So education is desperately needed. I conduct small Champagne classes/dinners from time to time in Chicago, tasting out 5 or 6 Champagnes, representing cuvées ranging from Blanc de Blancs to Vintage Brut to Rosé and match these wines up with food. But I can only reach a small group of individuals.

There are detailed books on Champagne, several of them excellent (especially from Tom Stevenson and Essi Avellan, Tyson Stezer and Gerhard Eichelmann). I highly recommend their books, as they are excellent studies of the leading Champagne houses as well as examinations of how Champagne is made.

But given today's need for quick information, books suffer, unfortunately, compared to the internet. You can argue all you want about whether books or the internet are better sources for information, but you have to accept that the internet has changed the way we look at things, and it's here to stay. 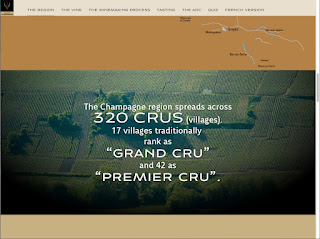 That's why it's such great news that the Comité Champagne - the CIVC, headquartered in Epernay in Champagne - has put together the Champagne Campus on their website (champagnecampus.com). This is an excellent way to learn about Champagne, as this online course is loaded with facts about numerous topics, from vineyard classification to grape varieties to production information. There are detailed maps as well as beautiful photos and it's a pleasure to read and look at.

What I love about the Champagne Campus is the fact that you learn about Champagne at your own level. When you first go to the site, you are asked four introductory questions to test your knowledge. Depending on how many of these you answer correctly, you are then told that you should study one particular level of the course, ranging from Novice to Lovers to Enthusiasts. Neat idea!

There is so much in this course, not only maps and basic facts, but also a great deal about history, climate, soils and even vine training (yes, this is a serious site about Champagne!). It's extremely well done and you can go back and forth between levels to make sure you're not missing anything.

While the best way to learn about Champagne is to open several different bottles and compare and contrast, Champagne Campus is a great complement to tasting Champagne, as you'll get a better understanding of what this wonderful beverage is all about.

A toast to the CIVC for creating Champagne Campus. I hope that millions will visit the site!
Posted by tom hyland at 9:22 AM No comments:

Simply Italian has been a great success for a decade now, with its combination of seminars and a gala tasting for the trade. This year, seminars include one about the wines of Veneto, Piedmont and Tuscany; one on Frascati; one on Emilia-Romagna, and finally, one on Sardinia (I will be conducting that seminar in Chicago).

Following the seminars will be a gala tasting featuring more than 50 producers from various regions of Italy, including Friuli, Lombardy, Piedmont, Veneto, Sardinia and Tuscany.

Here are the details:

For more information or to register (trade only), go to ieem.usa

Posted by tom hyland at 8:07 AM No comments:

Two from the Maremma: Fertuna and Sette Cieli


A guest post from my friend and colleague Bill Marsano 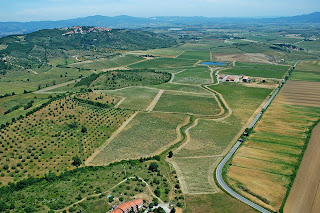 Two Italian estates of the Maremma—Tuscany’s southwest coast—uncorked their wines in Manhattan recently. Both Tenuta Fertuna and Tenuta Sette Cieli are hard by Bolgheri, the sub-zone of the Maremma that shot to prominence with Tenuta San Guido’s Sassicaia in the 1970s (it’s home to other Supertuscan producers as well, including  Tenuta Dell'Ornellaia, Gaja’s  Ca'Marcanda and Antinori’s Guado al Tasso). The wider Maremma now has stature despite its history as an obscure terra infida, or treacherous land: a haunt of bandits (long suppressed), malarial mosquitoes (now purged) and cattle-poking cowboys, or butteri, (now mostly a tourist lure). That stature comes from its wines, and because it is so hospitable to French vines, the Maremma is sometimes referred to as “Italy’s Médoc.” (Giacomo Tachis, godfather of Supertuscans, has called it the home of “deluxe enology,”no doubt with prices in mind.) Sangiovese remains inescapable nevertheless, and happily so.

Tenuta Fertuna, a mere stripling (founded in 1997), threw its luncheon at Mulino a Vino, a new cellar-dwelling “creative Italian” place on West 14th St. in the Meatpacking District. I like a darkish restaurant, so I think The New Yorker was a tad unkind in calling MaV a “dungeon-like space, gloomy and gilded, like Christian Grey’s guest room,” but “to each his,” etc. An example from the menu’s creative side is the smoked-cured wild salmon and saffron caviar topped with Amarone 2001 glaze and served on fennel panbrioche. It was fine, but stodgy me leans toward the large and tomato-sauced Mamma’s meatball and the properly cooked homemade pastas. It’s worth noting that MaV has a list of about 100 wines, all Italian, all available by the glass, all in the care of not only a sommelier but a mini-sommelier. That’s what the website says, anyway. 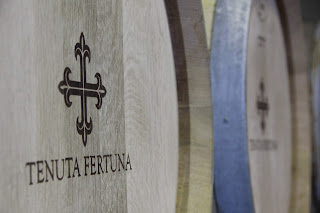 Fertuna’s wines were creative too—they were all IGTs, that category which allows much freedom from the sometimes-stifling DOC rules—but without punishment or humiliation. (Remember when Tignanello had to be labeled vino da tavola, Thirsty Reader? If not, I envy your youth.) Anyway, the first Fertuna was Dropello Toscano Bianco, a white Sangiovese (really) with a little Sauvignon Blanc. Straw yellow, it’s crisp and engaging, and it’s what Fertuna calls “accessible,” meaning affordable: I’ve seen it at about $10 a bottle, although the suggested retail is $16.

A bigger surprise was the Pactio Toscana Rosso: 60% Sangiovese, 30% Cabernet Sauvignon and 10% Merlot. Normally such a large dose of Cabernet absolutely flattens Sangiovese, but not this time: The Pactio still had Sangiovese’s distinct delicacy and elegance, the result of using only second- and third-fill barriques obtained from Marchese Nicolo Incisa della Rocchetta’s Tenuta San Guido. Indeed, Fertuna’s winemaker, Paolo Rivella (nephew of the renowned Ezio) worked hand-in-glove with San Guido’s team. Imagine: all that for $19. The final wine, LODAI (about $32), had even more Cabernet, 40%, and so, for me, missed the mark. Cab’s heft was certainly there for its innumerable devotees, but the dancer’s grace of Sangiovese was overwhelmed. If you’re not expecting Sangiovese, you won’t mind a bit.

Tenuta Sette Cieli actually hit town earlier by a month or so, and their luncheon was held at Upland (Park Ave. South & 26th St). My restaurant-savvy pals were floored, impressed, gob-smacked: “Justin Smillie’s place? You’re kidding! It takes months to get in there!” Had I but known I’d have put on airs instead of my pajamas.

It’s a handsome, airy, open-kitchen kind of place featuring “California cuisine,” which here means a lot of Italian, lots of local produce, and obscure ingredients (dentile, anyone? puffed farro?). Sette Cieli's wines were presented by the winemaker, Elena Pozzolini, a very pretty and enthusiastic young woman with a high-beam smile and a taste running to Cabernet and Prada handbags. She served her itinerant apprenticeship in the customary international way (Mendoza, Mornington Peninsula, Santa Ynez Valley, and Tuscany, where she was winemaker to Bibi Graeta at Testamatta, in the Fiesole Hills overlooking Florence. The wines she poured were from 2011, and so were not "her" wines; she came to Sette Cieli only two years ago (the estate itself dates to only 2001). But they certainly showed it to be capable of impressive wines. 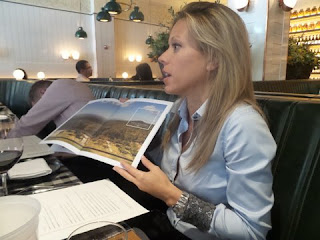 There’s another reason for online shopping: The SRP, or Suggested Retail Price, would cop the Pulitzer for Fiction every year if only prices were considered literature. They are fiction, however, to the extent that most retailers use them solely as a basis on which to discount.
Posted by tom hyland at 1:56 PM No comments: