A Family's Difficult Harvest in Bordeaux 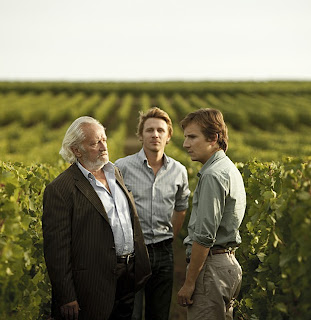 This post is a little different than others I've written for this blog, as this is a movie review. The movie is a French film called You Will Be My Son (Tu seras mon fils, in French with English subtitles) and it is an excellent drama about pride, tradition and jealousy within an estate in Bordeaux.

I saw the film recently in Chicago at the French film festival; I had read a brief writeup in a local paper and noticed the photo above with the vineyards in the background, which peaked my interest. Given the nice review, I knew I had to see it, especially given that the last two feature films I had seen about wine - namely the dreadful Bottle Shock and the boring A Good Year - were tremendous wastes of time. I thought that someone had to make a good movie about wine and You Will Be My Son is just that.


The story centers on Paul de Marseul (portrayed by Niels Arestrup, who gave a very touching performance in War Horse), the owner of a prestigious wine estate in Saint Emilion. He is dedicated to his profession and his winery's image and is set in his ways. That means that he will not let his son Martin (Loran Deutsch) handle any of the winemaking chores. He does let him handle administrative duties, such as ordering barrels or hiring workers for the harvest, but that is all. Martin asks his father to let him work in the cellar, especially as he has a degree in winemaking. But his father is not going to give him that opportunity, telling Martin, "You don't make wine in college. You need a nose, a palate. All you have is an ear."

As the grapes are ripening, Paul learns that his estate manager François Amelot (Patrick Chesnais, in a marvelously emotional performance) has been diagnosed with inoperable cancer and has been given only six months to live. Much is made of the cycle of life and death - the ripening of the grapes, the maturation of human life - that is a nice touch in the screenplay written by Gilles Legrand (who also directed the film) along with Delphine de Vegan and Laure Gasparotto.

Paul has trusted François for decades and has counted on his expertise at harvest time; indeed he tries to get him to oversee what will be François' last harvest. But he is just too ill to do much work, so Paul contacts François's son Philippe (Nicolas Bridet), who is the winemaker for Coppola in Napa Valley to come over and work the harvest and take charge in the cellar during this critical time. Philippe agrees, which is a big help to Paul, but creates a charged situation with Martin, who believes he should have been given this opportunity. 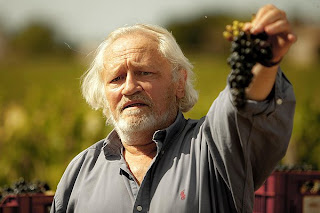 I won't give any more plot details away, except to say that Paul makes more gestures as time goes on to reward Philippe in spite of his own son Martin. Clearly, Legrand must have read East of Eden by John Steinbeck (or seen the Elia Kazan film version), as there is a similar theme here of deprived love and what can happen when a father does not confide in his son. Jealousy rules the day and even Philippe is unsure after a while that he should be the winemaker in place of Martin.

The story is nicely organized with multiple layers and these are characters we truly care about - we want to know all throughout the film how their lives will play out. The final act, which comes as an ironic, very somber sequence, is nicely done.

Wine drinkers of course, will love the shots of the vineyards with closeups of the grape clusters on the vine. There are also some lovely scenes in the cellar, where we see Paul pull out a few older treasured bottles as well as open his heart, as he tells of some past secrets. In vino veritas, indeed!

This is a wonderful film that I highly recommend. It opens on August 16 in Los Angeles and New York City. Here is a link to the trailer.

Posted by tom hyland at 9:53 AM No comments: